The Canadian Union of Public Employees is speaking out against changes to the Healthcare Employees’ Pension Plan (HEPP) announced on October 17, 2017.

“The changes to the plan announced today may force some health care workers to delay or change their retirement plans, and creates an unnecessary division between existing plan members and the future generation of health care workers,” says Shannon McAteer CUPE’s Health Care Coordinator.

“Two-tier pension plans are unfair to future members of the plan, and disproportionately affect newcomer or younger members of the workforce who are just starting their careers in health care in Manitoba.”

The Health Care Employee Benefit Plans (HEB Manitoba) which administers HEPP announced their decision to eliminate all supplementary and bridge benefits for new members after January 1, 2018, creating a two-tier plan with reduced benefits for new employees, among other changes to the plan.

“Health care staff work tirelessly every single day to support the health and well-being of the people of Manitoba,” said McAteer. “A strong workplace pension plan like HEPP is critical in recruiting and retaining health care workers in Manitoba, and with so much uncertainty in health care these days its unfortunate that health care workers now have one more thing to worry about”.

CUPE issued a letter to HEB Manitoba in response to these changes and is calling for a meeting with HEB Manitoba to open discussions on the governance structure of the plan and how these decisions are made to ensure better transparency for CUPE members who are members of the plan.

CUPE members are encouraged to contact HEPP for more information on the changes.

We also have an email petition for members to fill out to express their opposition to HEPP’s changes. 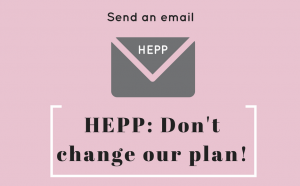 Next: CUPE Manitoba marks the...